Signals is a built-in Google Analytics (GA) feature that allows you to enable cross-device tracking in your Analytics account, without any manual tracking code adjustments.

When Google announced the addition of automatic cross-device tracking to GA, my mind was bit blown. I knew Google had the data to create this feature, but I never imagined that they would share that data with us.

Well, they did! And now every Google Analytics admin can add cross-device tracking to their account with just a couple button clicks in their analytics interface. 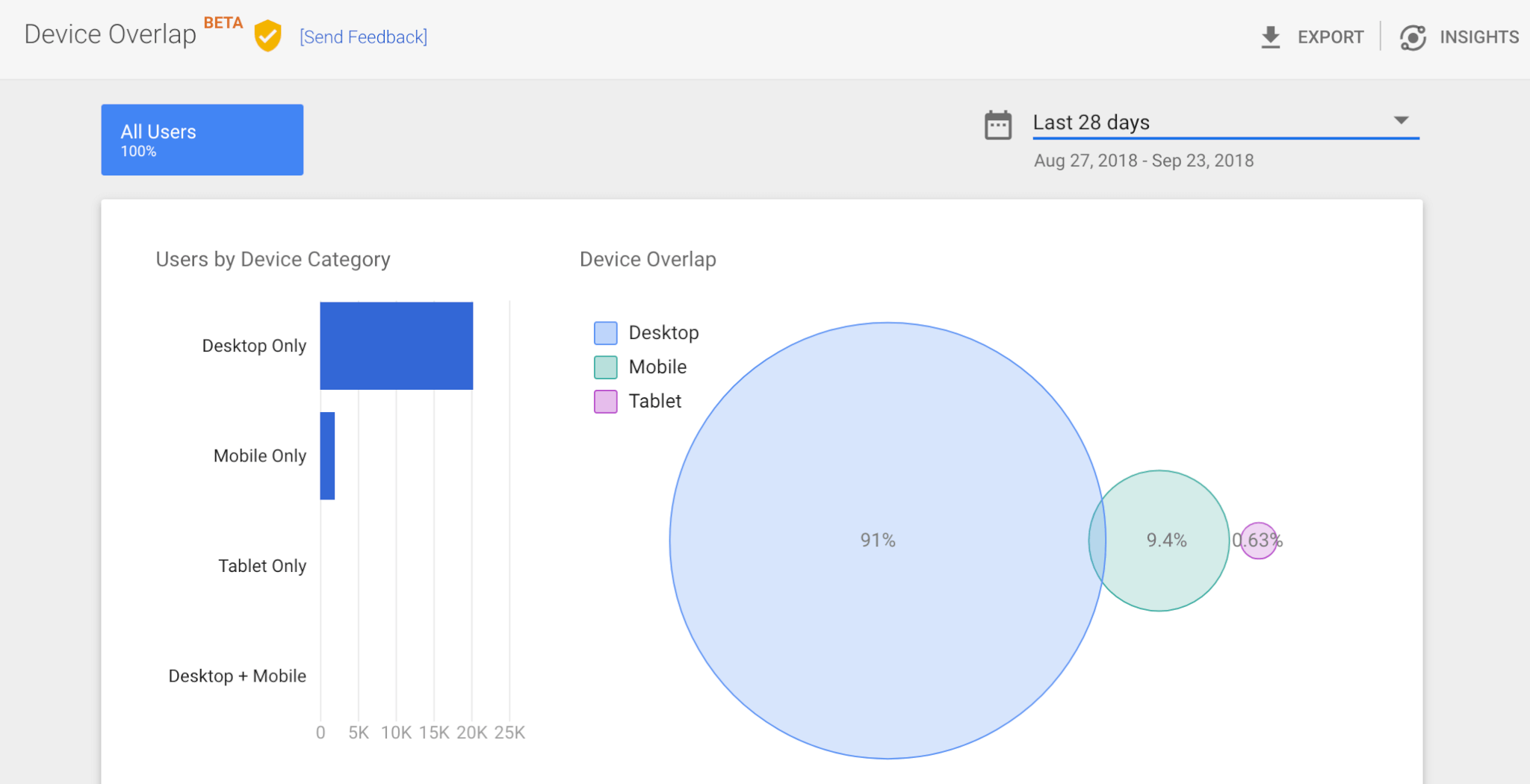 How do we use Google Signals?

Google Signals represents some exciting new measurement and tracking possibilities. But as cool as this feature could be, right now it’s still a beta. And at the moment, there are some significant glitches in the cross-device reports. There are also a few critical intricacies you should be aware of if you’re going to test this feature out.

In this video and post, we’ll look at how to get started using Google Signals. Then we’ll go inside my Google Analytics account, check out the cross-device tracking reports, and learn about how Google Signals works.

When Google Signals first launched, there was a lot of confusion about how to enable this feature. The problem wasn’t that Google Signals is challenging to set up, but rather that it did a brief disappearing act.

Google introduced Signals at the 2018 Marketing Live presentation. I was so excited about this feature that I wrote about a week after it launched. And I advised everyone to look for Google Signals in their accounts.

But when many of readers logged into their GA Accounts, Signals was nowhere to be found.

Possibly Google didn’t release Signals to every account. Or Google briefly removed it to work out some post-launch problems. I am not sure why Signals vanished for a short period. But this new technology is for real. And by now, the beta version is hopefully available again in your account.

Why Google Signals is so innovative

There are a few reasons why Google Signals is capable of having a massive impact on the analytics community.

Could Signals be the end of manual cross-device tracking installations?

Google Signals may be capable of saving us from the complicated and often dysfunctional job of manually configuring cross-device tracking. Before the release of Signals, if you wanted to do cross-device tracking in Google Analytics, you had to implement custom javascript to replace you users’ Google Analytics client ID with your own unique non-personally identifiable user value.

Cross-device tracking for everyone!

But the average Google Analytics account owner doesn’t have the ability or budget to set up cross-device tracking manually. So those account owners were resigned to relying on data that was inflated by users visiting their site from multiple devices.

The release of Google Signals allows all Google Analytics account owners to put cross-device tracking in place. And in turn, Signals should increase the accuracy of everyone’s user data.

Google has more access and better data than you do

Another reason Signals is such a big development is that Google is better suited to match users across their devices than anyone else.

Google’s fully integrated domination of the search eco-system puts them in a better position than anyone to identify who we are on any device we use. This means that Google’s cross-device tracking technology is going to (eventually) be more accurate than any custom solution the rest of us can put in place.

Where does Google Analytic’s cross-device data come from?

1) Are signed into their Google account in their browser

2) And have Ads Personalization turned on in their settings.

By default, Ad Personalization is turned on in everyone’s Google account settings. So just about every user that’s logged into their Google account can be tracked using Google Signals. 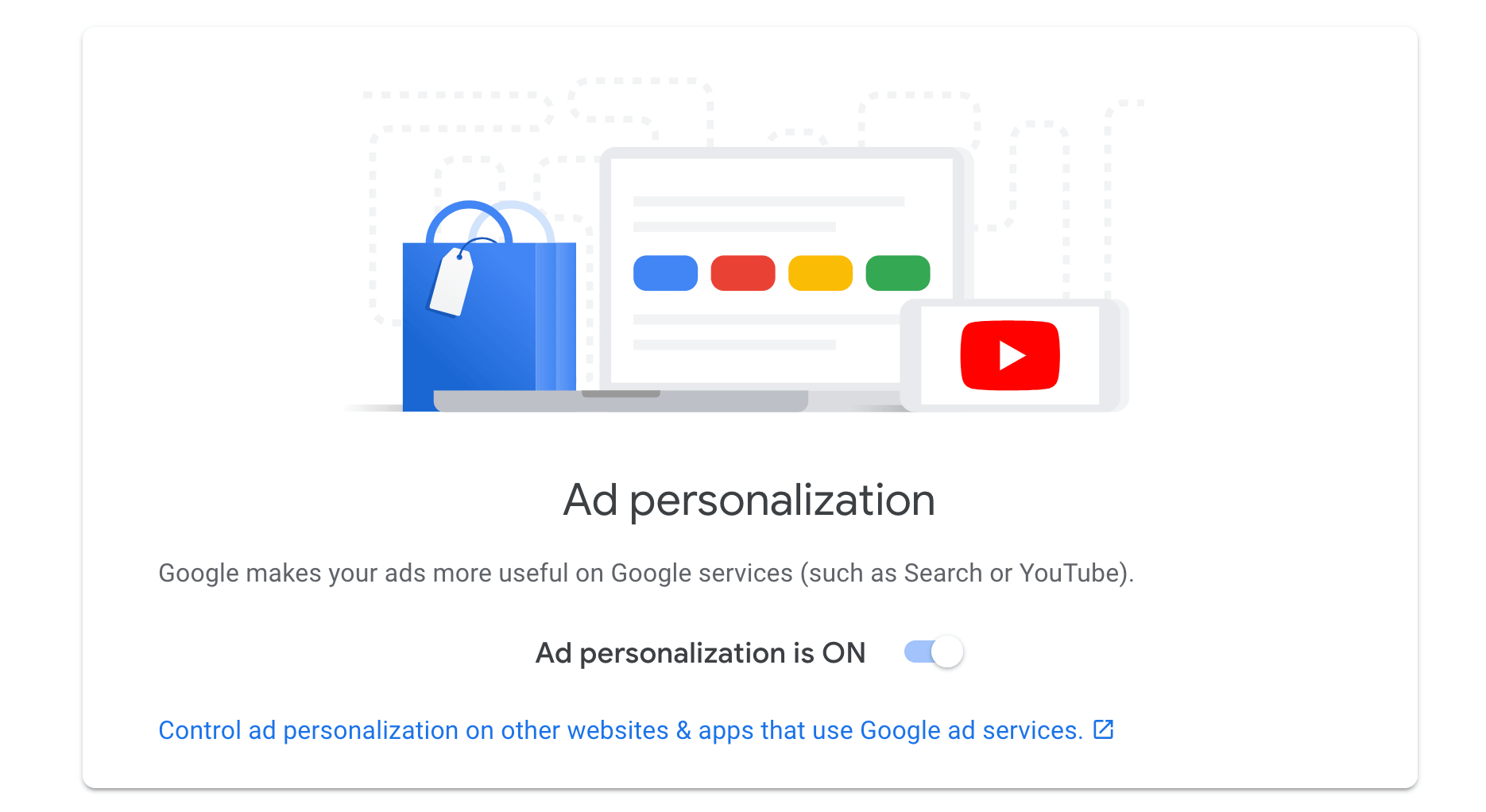 Alright, now that we know the background, let’s learn how to use Google Signals.

How to enable Google Signals

Cross-device tracking is not retroactive

Signals is not a retroactive feature. So your reports will be empty until your account accumulates enough data to start matching your website visitors with their devices.

Google has also indicated that by default, they are only retaining your “signed-in” (meaning users logged into their Google account in their browser) user data for a maximum period of 26 months. However, if you have your data retention set for a shorter period, Google will dump your cross-device data based on your settings.

What do the cross-device tracking reports have to offer

The device overlap report features a Venn diagram that displays the portions of user devices that visited your site by device category. The raw user numbers in this report are likely to be very similar to your standard devices report. But the diagram provides a useful illustration of how many users visited your site on multiple devices. 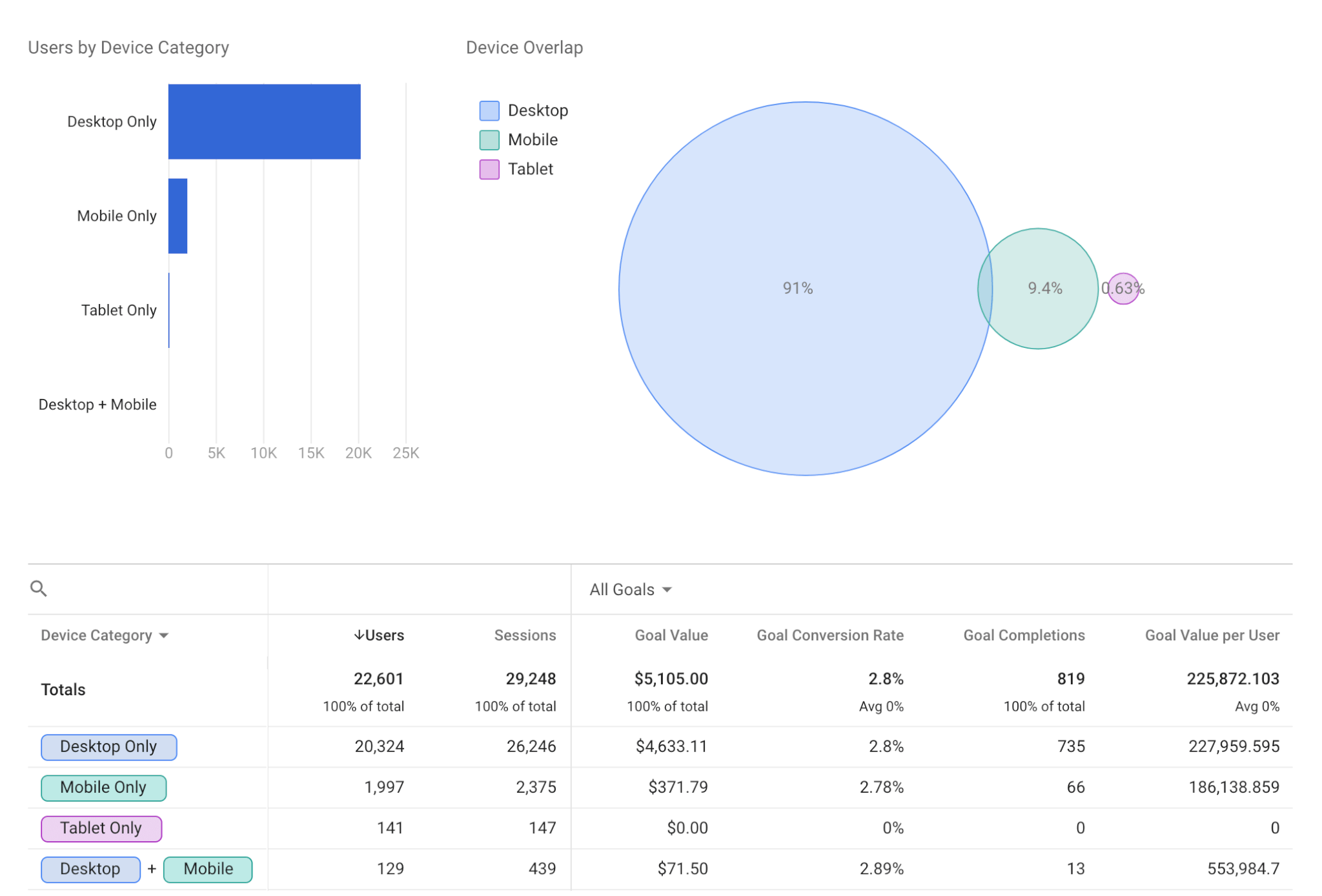 This report seems to require a good chunk of data to function. I’ve noticed that when I shorten the look-back period on this report to under 28 days, I lose any overlap data. So you may need to wait 30 days from the time you enable Signals to see any actual cross-device information. 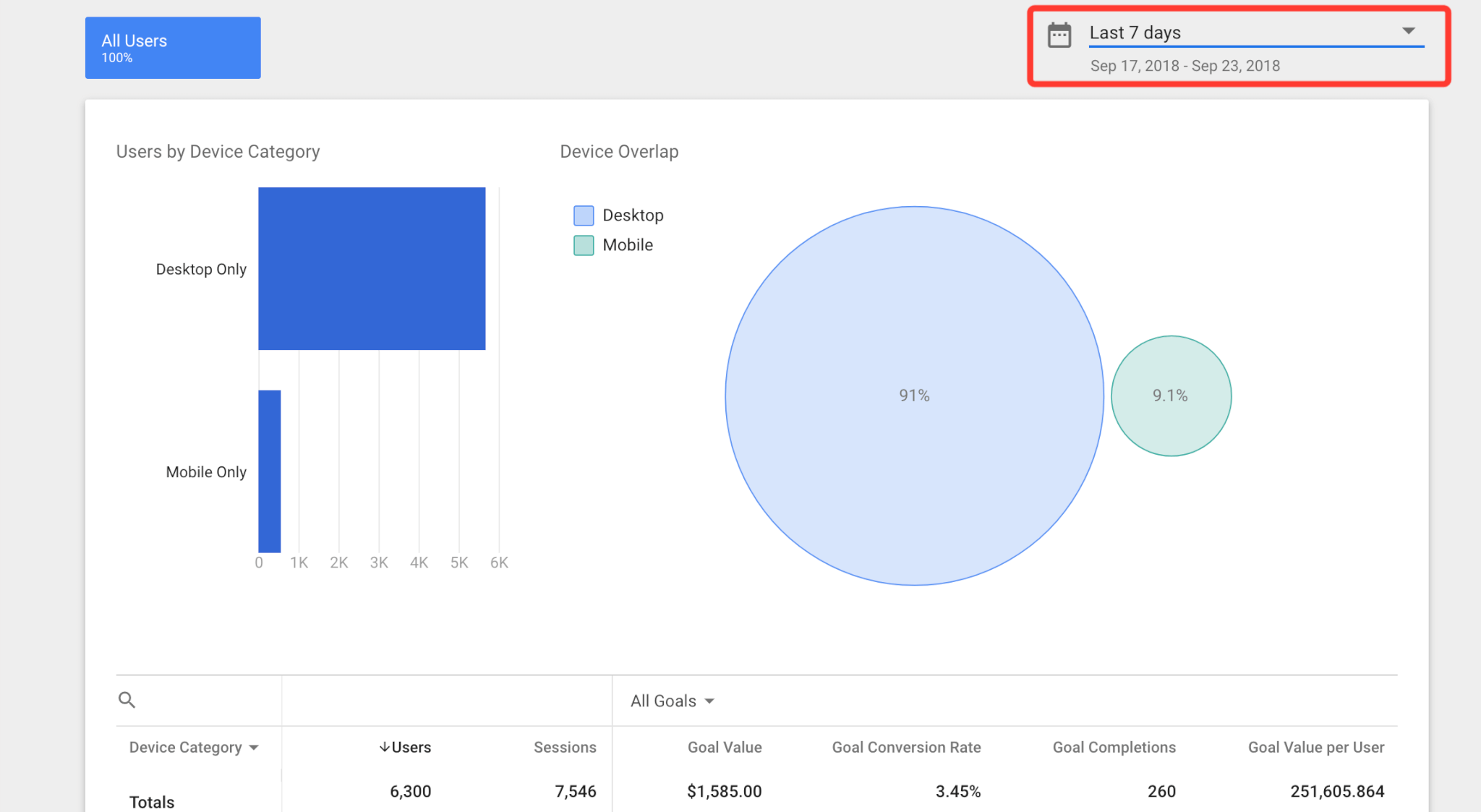 You have always been able to obtain most of the information provided in the cross-device reports within your device and mobile reports inside Google Analytics. So there is little new or useful information inside these new Google Signals reports.

The lack of useful information could just be a product of the site I’m analyzing since the majority of my traffic is exclusively desktop users. But it also appears Google is still working some kinks out of how they compile our cross-device data.

Another interesting aspect of the cross-device reports is the focus on conversion data. Understanding how device overlap contributes to our conversions could be very beneficial.

However (at least in my account) the goal values are completely broken. My total goal value is reported as $5,105. But Google calculates that my goal value per user is over $200K. That’s an insane number! While I value my website users that much, this is obviously an inaccurate calculation.

At the moment, the device overlap report lacks the most critical features I rely on as an analyst. Features like table filters and secondary dimensions. So there isn’t much I can do with this report outside of … well, looking at device overlap.

The device paths report is intended to help us see the different devices visitors use to interact with our content. This report also lacks depth. And the filtering options only function for traffic segments that have accumulated a significant amount of data.

Right now, the channels report is essentially a less effective way of analyzing the same data that’s in your all traffic reports. There doesn’t appear to be any new information in this report that isn’t in your standard channel groupings. 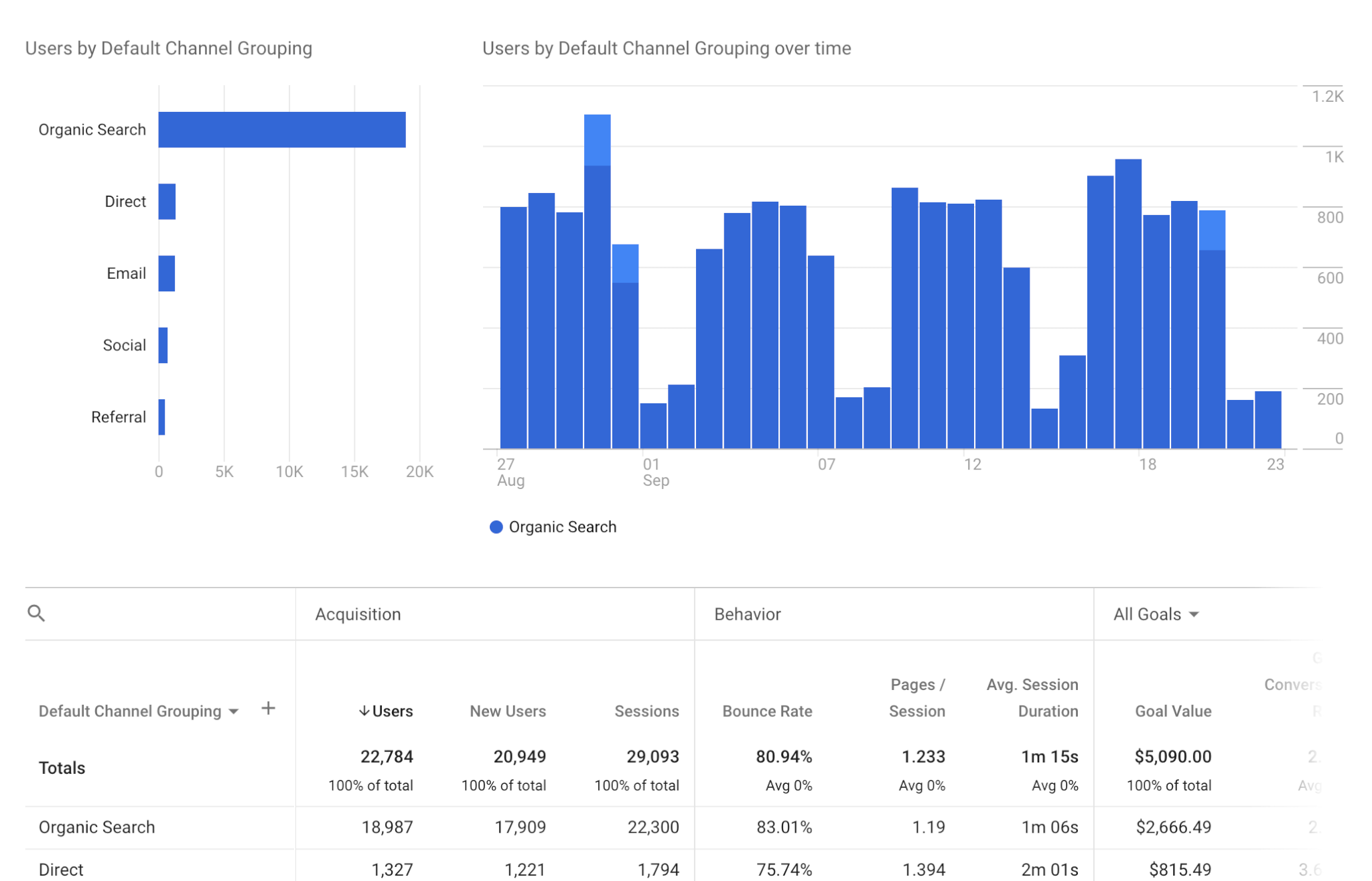 My initial impression of the acquisition report is that it’s a more aesthetically pleasing view of the same data you can see in your device reports. As with the other cross-device reports, this one also lacks the standard GA functionality I’ve come to rely on for doing real analysis. 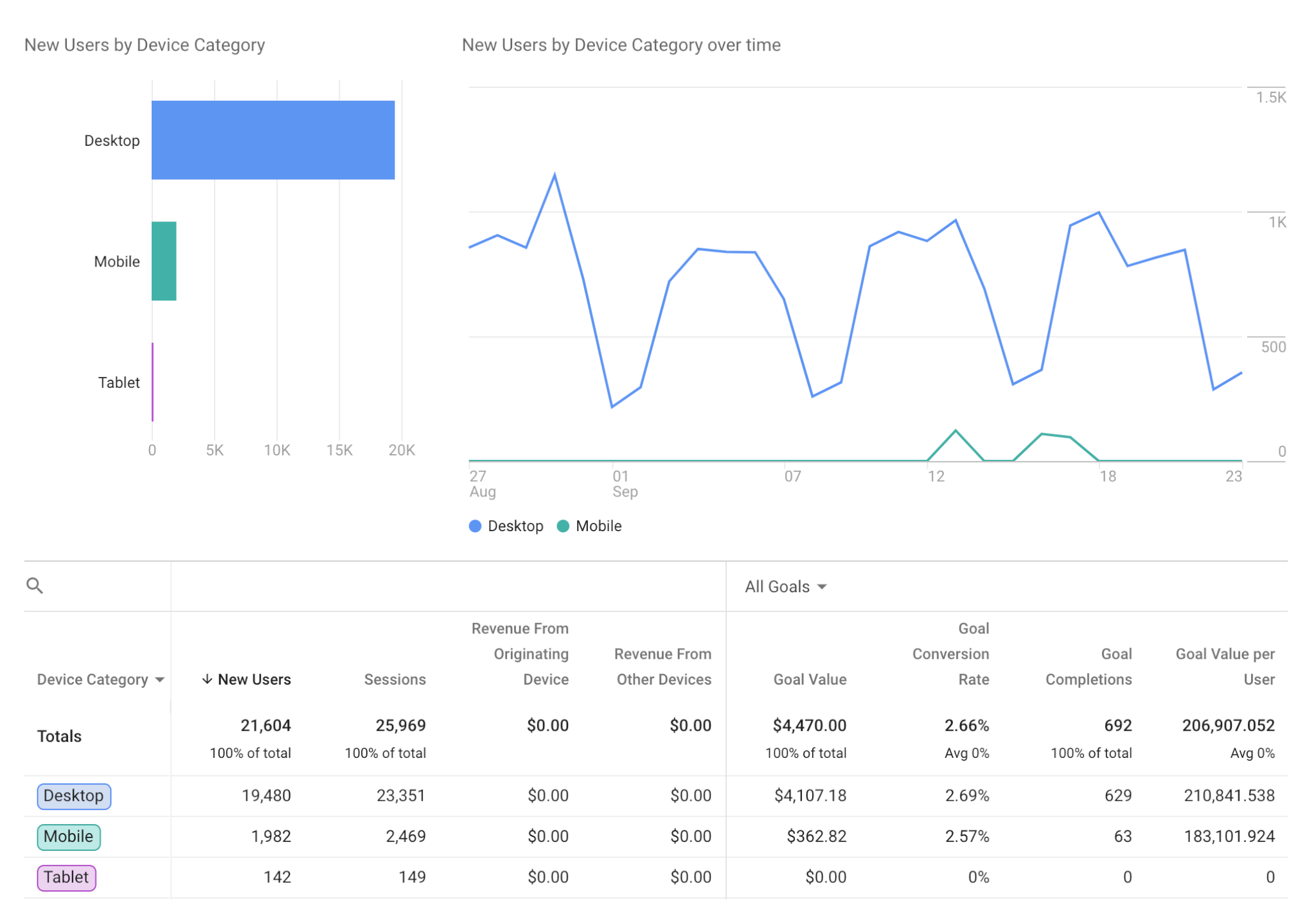 Overall review of the Google Signals and the cross-device reports

At this point my overall impression of the cross-device reports is… Meh. Just plain, Meh!

The interface for this reporting area is slick and appealing. But since you can’t drill down into the data, there’s not much you can learn from the actual reports.

Another big concern I have is that Google tends to show us the latest variations on their platforms in beta. Then, they slowly integrate that new functionality across their entire product. I could just be viewing things from a “tinfoil hat” perspective here. But if the UI and functionality in the cross-device reports is an indication of changes to come throughout Google Analytics, then I am very concerned.

What you need to know about Google Signals right now

Here are the key things to be aware of when you’re experimenting with the beta version of your cross-device reports:

1) The focus of these report is really on conversions

Based on the beta version of Signals, it seems that our cross-device reports are going to focus primarily on conversions.

2) Some of the reports are broken right now

As you saw when we looked at my conversion metrics, some of the calculations and data in the cross-device reports are completely dysfunctional at the moment.

In most Google Analytics accounts, it’s going to take at least 30 days to accumulate enough data to use the cross-device reports. So, as long as your Google Analytics tracking is GDPR compliant, you might as well go ahead and turn on Google Signals now.

4) Your mileage will vary

The utility you gain from cross-device reports will depend on the amount and type of traffic your website gets. As you saw from the analysis of my site, the cross-device reports won’t offer you a whole lot of beneficial information if 90% of users visit your website on one type of device. But if you have a site that earns a significant amount of mobile or tablet traffic, then the device overlap report can help you learn more about your user experience.

What signals are you getting from Google Signals?

So, I showed you inside my cross-device reports and shared my impression of Google Signals. Now I want to hear from you!

Leave a comment below, and share what you see in your cross-device reports. And let us know what you think of think of this new feature.

Keep in mind, the product development team at Google Analytics will listen to this feedback if we get enough responses. Especially feedback about technology that’s still in beta. So leave a comment with your thoughts, and we’ll see if we can Google to address our concerns.

Please log in again. The login page will open in a new tab. After logging in you can close it and return to this page.