This might be a new record for me. Last week’s newsletter, I wrote about Google’s new tracking code and expressed my skepticism.

The post was written on a Tuesday afternoon and scheduled to be sent out to you on Wednesday. As soon as I hit publish, my opinion on gtag.js had already started to change.

For this week’s newsletter I would like to explain what happened.

While I was researching last week’s post, I couldn’t find answers to any of my pressing concerns. So I tweeted my frustration and thought nothing of it. 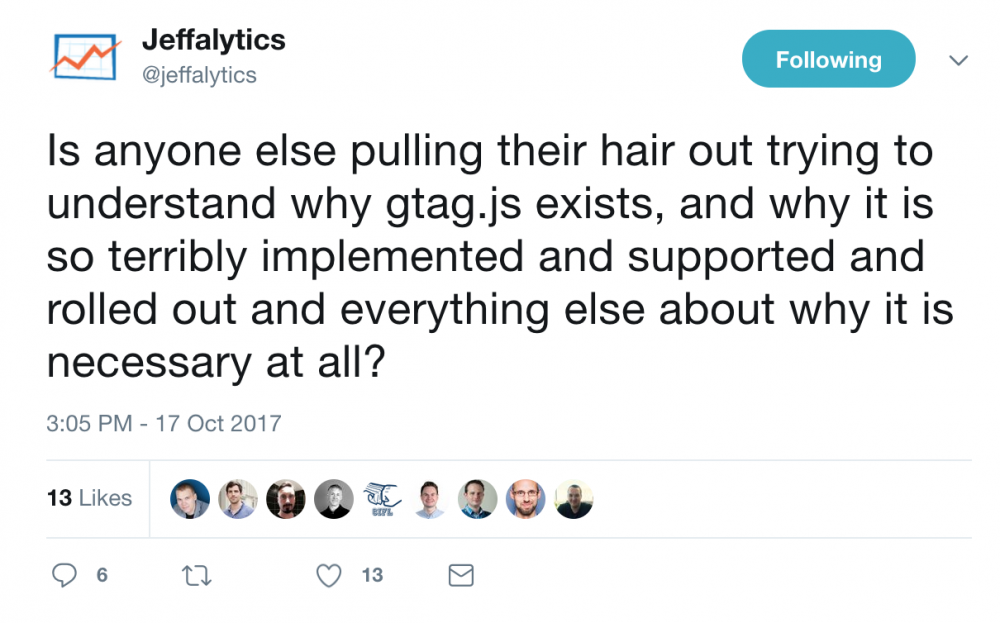 I went back to my hangry writing and scheduled everything for the next day.

When I woke up the next morning, a modern day hero from Google, Brian Kuhn, had offered to answer my questions.

He cleared up a lot of my fear, uncertainty and doubt (FUD), and made me more comfortable with the change. All of my comments from the blog post still stand, but I’m more optimistic about the new tracking method now than I was a week ago. Here’s why.

Gtag.js rollout was in response to changes in Safari going live in iOS 11

I am reading between the lines here, but it doesn’t seem like Google was ready to release gtag.js two weeks ago. However, they felt obligated to push it live to correspond with millions of people getting their new iPhones and upgrading their operating systems (iOS 11 was released on September 19th).

It seems like Google would have waited longer to release gtag.js if they had their way. But they were up against the clock, and documentation hasn’t quite caught up.

Their hand was forced (even with Apple’s initial announcement in June/July giving 3 months warning), and so a bunch of changes were pushed before being ready for prime-time. Unfortunately, Google only announced the changes with a pair of blog posts and a stealth update to the tracking code section of AdWords and Analytics.

My theory is that this change is also why Google finally rolled out the new AdWords interface to everyone on October 11th. This was a change they announced in May of 2016, but kept delaying the roll-out.

Think of Gtag.js as a lightweight Google Tag Manager

I have learned a lot about the new gtag.js over the past week.

2) The datalayer in gtag.js does not conflict with GTM, and can coexist no problem.

3) gtag.js is considered by Google to be a lighter version of GTM. This means they are similar, but gtag.js is easier to set up. It’s a less technical version of GTM and makes core tracking super easy. One set of code on your site, declarations for AdWords and Analytics, and you are good to go. [IN THEORY.]

4) The Jury is still out! I am skeptical about gtag.js, but it is the future. It will get better as Google releases more support documentation and the analytics community embraces the change.

5) I also learned I should eat something before writing blog posts.

So that’s what has changed since I last wrote you. We’ll try not to let this newsletter turn into weekly updates on Google drama and product roll-outs, but hopefully you are finding these useful since it impacts everyone with an analytics account.

Please log in again. The login page will open in a new tab. After logging in you can close it and return to this page.